Chicken eggs as an indicator of POPs pollution in Thailand 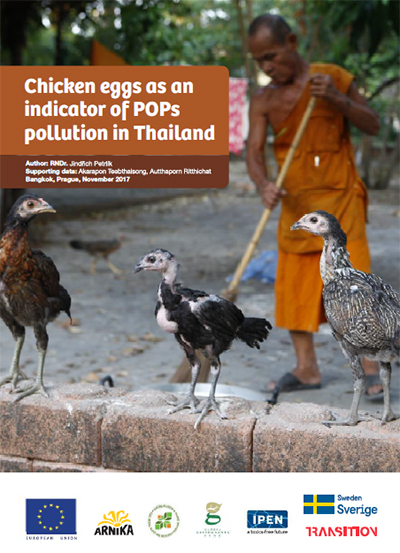 In this study, we present the results of monitoring free-range chicken eggs from selected sites in Thailand which are contaminated by persistent organic pollutants (POPs). Free-range chicken eggs were used for monitoring levels of contamination by POPs in various locations in many previous studies (Pless-Mulloli, Schilling et al. 2001a, Pirard, Focant et al. 2004, DiGangi and Petrlik 2005, Shelepchikov, Revich et al. 2006, Aslan, Kemal Korucu et al. 2010, Arkenbout 2014). Eggs have been found to be sensitive indicators of POP contamination in soils or dust and are a significant exposure pathway from soil pollution to humans. Eggs from contaminated areas can readily lead to exposures which exceed thresholds for the protection of human health (Van Eijkeren, Zeilmaker et al. 2006, Hoogenboom, ten Dam et al. 2014, Piskorska-Pliszczynska, Mikolajczyk et al. 2014). Chickens and their eggs might therefore be ideal “active samplers”: an indicator species for evaluation of contamination levels of sampled areas by POPs, particularly by dioxins (PCDD/Fs) and PCBs. Based on this assumption, we have chosen a sampling of free-range chicken eggs and their analyses for selected POPs as one of the monitoring tools within the project – Increasing Transparency in Industrial Pollution Management through Citizen Science’’ (further information about the project can be found at http://english.arnika.org/thailand or http://earththailand.org/en/). The data and analyses of free-range chicken eggs discussed in this report were obtained during several field visits in 2015 – 2016 as a result of the two above-mentioned joint projects of Thai and Czech NGOs. A general description of samples and a list of sampled localities can be found in Chapter 2. Major localities are described in the broader report about POPs in four hotspot areas (Mach, Teebthaisong et al. 2017) and in the report on mercury levels in fish from Thai hotspots (Tremlova 2017). These reports are also complementary in overall evaluation of chosen hotspots.

This report was prepared and published as a part of the project “Increasing Transparency in Industrial Pollution Management through Citizen Science ” funded by the European Union (EU) and co-funded by the Ministry of Foreign Affairs of the Czech Republic within the Framework of the Transition Promotion Programme – a financial assistance programme supporting democracy and human rights using the Czech Republic’s experience with social transition and democratization. Production of this publication was possible also thanks to Government of Sweden and Global Greengrants Fund.

The Project was implemented by Arnika – Toxics and Waste Programme based in Prague, Czech Republic and Ecological Alert and Recovery - Thailand (EARTH) based in Bangkok, Thailand as part of the work of Dioxin, PCBs and Waste working group of International POPs Elimination Network (IPEN). The content of this publication does not reflect the official opinion of the European Union, Ministry of Foreign Affairs of the Czech Republic, Government of Sweden or any of the institutions providing financial support. Responsibility for the content lies entirely with authors.