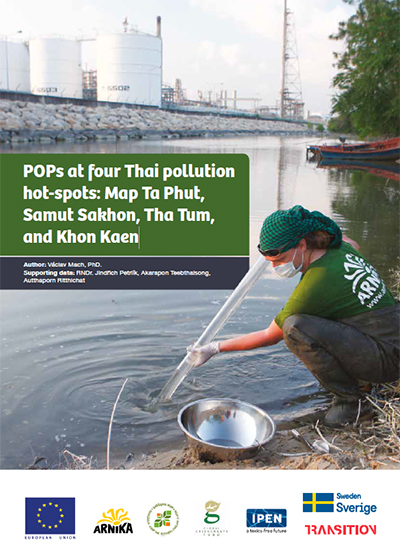 Persistent organic pollutants (POPs) are toxic chemicals that persist over long periods of time in the environment. These chemicals are industrially synthesized organic chemicals (DDT, aldrin, chlordane, dieldrin, endosulfan, PCBs, and many others) or unintentional products of chemical and combustion processes (dioxins, hexachlorobutadiene, hexachlorobenzene, PCBs and other). The demand for agricultural productivity caused a rapid increase in the use of organochlorine pesticides in Thailand during the period from 1950 to early 1970. Moreover, some other POPs as PCBs were imported to Thailand in various products. Environmental implications from historical use of organochlorine pesticides, PCBs, and other POPs remain. Furthermore, unintentional POPs are still synthesized and emitted into the environment from many industrial processes.

This study is focused on the presentation of data related to contamination by POPs in four hotspot areas in Thailand. These hotspots areas are: The Map Ta Phut industrial complex, the Samut Sakhon hotspot area, the Tha Tum industrial complex, and the Pulp and Paper industrial area near Khon Kaen. The data were obtained from these hotspot areas during three sampling campaigns conducted in Thailand, from February 2015 to March 2017. The field campaigns served for inspection of the hotspot areas and collecting organic (fish, mollusc, shellfish, and chicken eggs) and inorganic samples (soil, sediment, and ash). The background fish samples were taken in the Thap Lan National Park – representing an unpolluted area of Thailand. The background egg sample was bought in a supermarket in Bangkok. Collected samples were analysed for content of multiple POPs – dioxins (PCDD/Fs), PCBs, chlorobenzenes, organochlorine pesticides, polycyclic aromatic hydrocarbons, polybrominated diphenyl ethers, hexabromocyclododecane, and brominated flame retardants.

Our results show that there are residues of organochlorine pesticides still present in the environment of Thailand. The most common organochlorine pesticide is DDT and its residues, which agrees with literature information and amounts of used pesticides. The most problematic POPs found in the hotspot areas are unintentionally produced chemicals such as dioxins, hexachlorobenzene, pentachlorobenzene, PCBs, hexachlorobutadiene, hexachlorocyclohexane. These contaminants can be created during industrial processes, such as paper bleaching, small metallurgical facilities used as waste recycling operations, open burning of waste (e-waste in particular), chlor-alkali production, production of plastics or waste incineration. The most contaminated matrix in the hotspot areas are eggs, because most of the egg samples exceed the maximum residue limits of hexachlorobenzene and hexachlorocyclohexane for Thailand or maximum levels of PCBs and PCDD/Fs for European Union.

This report was prepared and published as a part of the project “Increasing Transparency in Industrial Pollution Management through Citizen Science ” funded by the European Union (EU) and co-funded by the Ministry of Foreign Affairs of the Czech Republic within the Framework of the Transition Promotion Programme – a financial assistance programme supporting democracy and human rights using the Czech Republic’s experience with social transition and democratization. Production of this publication was possible also thanks to Government of Sweden and Global Greengrants Fund.

The Project was implemented by Arnika – Toxics and Waste Programme based in Prague, Czech Republic and Ecological Alert and Recovery - Thailand (EARTH) based in Bangkok, Thailand as part of the work of Dioxin, PCBs and Waste working group of International POPs Elimination Network (IPEN). The content of this publication does not reflect the official opinion of the European Union, Ministry of Foreign Affairs of the Czech Republic, Government of Sweden or any of the institutions providing financial support. Responsibility for the content lies entirely with authors.