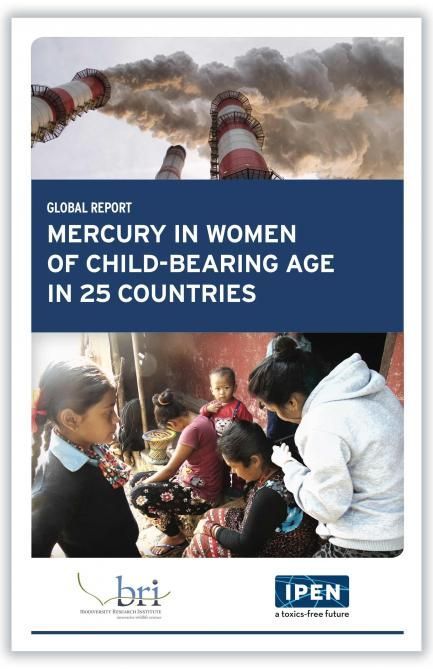 Mercury is a potent neurotoxin, especially to the developing brain, and can affect the developing fetus months after the mother’s exposure. The harmful effects that can be passed from the mother to the fetus when the mother’s mercury levels exceed 1 ppm include neurological impairment, IQ loss, and damage to the kidneys and cardiovascular system. At high levels of mercury exposure this can lead to brain damage, mental retardation, blindness, seizures and the inability to speak. While researchers have studied mercury body burden in specific regions of the world, information in developing and transition countries is lacking. This comprehensive study focused on measuring the mercury body burden of 1044 women of child-bearing age in 25 developing and transition countries. The data indicates that there is a serious and substantial threat to women and children’s health from mercury exposure.

• 1044 women of child-bearing age from 25 countries participated in the study. 42% of them had mercury levels greater than 1 ppm — the level that approximately corresponds to the US EPA reference dose.* 55% of the women had mercury levels greater than 0.58 ppm mercury, a more recent, science-based threshold based on data indicating harmful effects at lower levels of exposure. Mercury is a health threat to women and the developing fetus.

• Women of the Pacific Islands have elevated mercury levels, likely due to a fish-rich diet. Distant air emissions of mercury from coal-fired power plants, cement kilns and other industries contaminate ocean fish that serve as a primary protein source for Pacific Islanders.

• Indigenous women in Alaska have mercury levels of concern due to their subsistence diet of sea mammals and fish. Consumption of seals may be a key source of mercury exposure.

• Women from locations in Albania, Chile, Nepal, Nigeria, Kazakhstan, and Ukraine have mercury levels of concern due to localised pollution of waterways and suspected fish contamination.

*This is the daily exposure that US EPA considers “likely to be without an appreciable risk of deleterious effects during a lifetime.

Results from Communities across the Globe