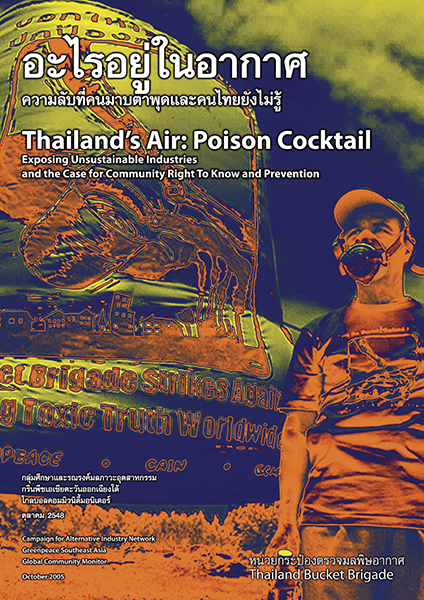 Map Ta Phut Industrial Estates were touted as the most modern in the making and have currently housed over 90 industrial facilities including oil refineries, petrochemical and chemical facilities and hazardous waste landfills and treatment facility with over 200 stacks emitting toxic pollution into the air of 25 surrounding communities. Over two decades of industrial development have turned the area, once rooted by small rural farming and fishing communities, into a number one toxic hot spot in the country. The rapid industrialization has resulted in deterioration of natural resources and changes in social and economic structure following by numerous social, socio-economic, environmental, and health problems. Accumulated pollution and environmental problems as well as mysterious diseases have been emerging, as very much linked to each other, and drastically affect small locals who are weak in power to negotiate with the powerful industries or bureaucratic agencies

Thailand Bucket Brigade aims to introduce the Thai society that communities directly affected by industrial pollution can engage in monitoring their own environment. ‘Bucket Brigade’ is generally a group of community members engaging in monitoring communities’ air quality, by using ‘Bucket’ as a tool. With the aim to empower the communities by arming them with knowledge and scientific proofs, the result of air sampling strengthens evidence of industrial pollution. The ‘Bucket’ is a sturdy, easy-to-use plastic container with a special sampling ‘Tedlar’ bag attached to capture gases.

These discoveries by the Thailand Bucket Brigade are even more disturbing considering past air and health studies that had documented high levels of dangerous chemicals and serious health effects since at least 1998. The finding of these various toxic chemicals illustrates health and environmental problems that exist in the Thai society. It echoes foundation of problems in Thailand originated from industrial development under the government policies that lack disclosure of relevant pollution information and most importantly lack public participation.

This new report, Thailand’s Air: Poison Cocktail, gives fresh evidence that the proposed ‘Community Right To Know Law’ and the ‘National Pollutant Release and Transfer Registers (PRTR) System’ are essentially needed along with better environmental monitoring and direct involvement of affected communities in environmental decision-making with the aim to achieve environmental justice and sustainable society.