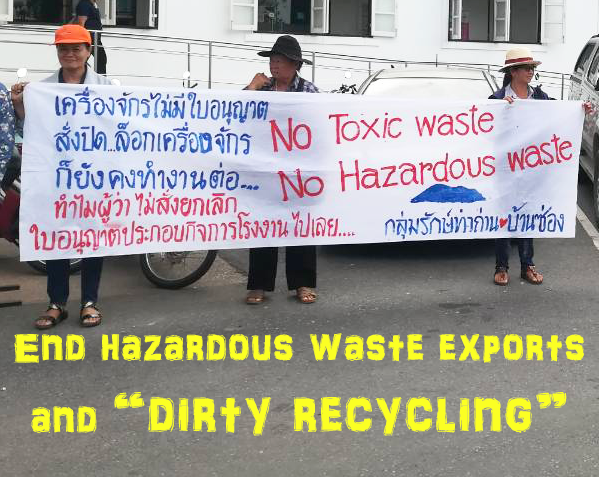 BANGKOK/PRAGUE – In recognition of World Environment Day 2021, the NGOs EARTH (1,3) and Arnika (2,3) have called for an end to hazardous waste exports and dirty recycling industries through the universal ratification of the Basel Ban Amendment (4). As the world enters the UN decade of ecosystem restoration, pollution from dirty recycling continues to devastate local environments and health around the world. Without universal ratification of the Basel Ban Amendment, this problem will continue.

After China’s 2018 waste import ban came into effect in January 2018, the amount of plastic scrap and e-waste exported to Thailand increased (5). Recycling processes, especially those related to plastic, have been identified as sources of dangerous pollutants (5). These pollutants could impact on the environment and livelihoods of communities living near recycling plants. In response, civil society organizations mobilized and called for prohibitions and regulation of imports of plastic scrap and e-waste. In August 2018, the Thai government produced a resolution to ban imports of e-waste categorized under the Basel Convention and a plan to phase out imports of general plastic scrap within the next two years.

Since 2017, EARTH has observed many recycling plants that burn and process metals without precautionary measures and emit airborne contaminants. “Dirty recycling industries have had a devastating impact on the environment and livelihoods in Thailand. On one hand, they have pushed out smaller waste processors and trash collectors, causing financial difficulties for many of them. On the other hand, the improper waste processing methods have caused pollution of the local environment,” explains Akarapon Teebthaisong, Research and Technical Officer from EARTH. “Pollutants such as heavy metals have contaminated the local atmosphere and water sources. Persistent Organic Pollutants such as Dioxins/Furans also pose the threat of long-term contamination of the eco-systems and of the food web, potentially threatening the health of the population on a regional to national level.”

Local communities have not been silent in the face of such threats. Thamonwan Wannapirun, leader of the Tha Than-Ban Song group, has been advocating closure of transnational recycling factories in her community, after their presence and operations led to severe contamination of the local waterway and groundwater wells as well as constant air and noise pollution: “We would like countries around the world to stop exporting their waste to countries with weaker legislation and poorer enforcement standards. Right now, Thailand has become a garbage dumping ground, and local communities like us are suffering from the consequences.”

Thamonwan would like to see countries around the world ratify the Basel Ban Amendment, as a significant step to ending the international trade in hazardous waste and dirty recycling. The amendment’s prohibition of imports and exports of hazardous wastes between member states will close the loopholes and end policies that allowed the continuation of e-waste and plastic scrap imports. “We would like the leaders of nations and industries to think of the masses of people living with the consequences of their actions. Every human deserves clean air, clean water, a clean environment, and a healthy livelihood. Please think of this and join the amendment. This will help the global effort to protect and improve the environment.” The main exporters of e-waste and plastic scrap to Thailand in 2021 and their status regarding the Basel Convention and the ban amendment are listed in Table 2 and Table 3.

Miroslava Jopkova from Arnika states: “When international waste trading and dirty recycling are not properly controlled they have an impact on communities. We urge the Thai government to ratify the Basel Ban Amendment (4), which will allow the prohibition of hazardous wastes in Annexes I, III, VIII, and IX. This failure to act is unfortunately common in other countries in ASEAN and around the world. Without the active commitment of states, international laws such as the Basel Convention (4) have no impact on the global effort to protect the environment. Therefore, as World Environment Day 2021 marks the global community’s entrance into a new decade of ecosystem restoration, we unequivocally call for an end to exports of hazardous wastes and dirty recycling industries through universal ratification of the Basel Ban Amendment.”

The information shown in the table is compiled and organized by EARTH. Source of raw data: Information and Communication Technology Center, Ministry of Commerce with cooperation of the Customs Department. URL: http://tradereport.moc.go.th/TradeThai.aspx.

The information shown in the table is compiled and organized by EARTH. Source of raw data: Information and Communication Technology Center, Ministry of Commerce with cooperation of the Customs Department. URL: http://tradereport.moc.go.th/TradeThai.aspx.

The Information shown in the table is compiled and organized by EARTH. Source of raw data: Information and Communication Technology Center, Ministry of Commerce with cooperation of the Customs Department. URL: http://tradereport.moc.go.th/TradeThai.aspx.

(1) Ecological Alert and Recovery – Thailand (EARTH) is an independent non-governmental organization striving for social and environmental sustainability and justice in Thai society. EARTH serves as a watchdog monitoring the Thai government’s industrialization policy, industrial pollution, and unsustainable consumption patterns. We promote climate justice, good governance, and the accountability of governmental and international agencies. EARTH focuses on the impacts of hazardous substances on ecosystems, local communities, and workers’ health. Read more at www.earththailand.org/en.

(2) The Czech non-governmental organization Arnika focuses on nature conservation, toxics and waste management, and public participation in decision making on environmental issues. During its existence, Arnika has become a valued European NGO in terms of fighting against toxic substances and chemicals or unsafe contamination of the environment and enhancing spreading the right to have information about chemical pollution. The organization cooperates with a number of partners around the globe (e.g. in Ukraine, Armenia, and Bosnia and Herzegovina) to provide a better and healthier future for as many as possible, regardless of the geographical location. Read more at www.arnika.org/en

(3) EARTH and Arnika are members of IPEN (International Pollutants Elimination Network), a global network of public interest organizations improving chemical policies and raising public awareness to ensure that hazardous substances are no longer produced, used, or disposed of in ways that harm human health and the environment. Read more at https://ipen.org/

(4) The Basel Convention Ban Amendment is an Amendment to the Basel Convention on the Control of Transboundary Movement of Hazardous Waste. While the Basel Convention requires the prior informed consent of importing countries before the export of hazardous waste; the Ban Amendment takes it a step further by prohibiting exports of hazardous waste. The amendment was introduced in 1995 and came into legal force in 2019, with the completion of the requisite number of parties who have ratified it. Not all countries have ratified the Ban Amendment, which means the trading of hazardous waste can still occur between two parties that have yet to ratify it. An example of this is Thailand as an importer and the United States of America as an exporter. Information retrieved from https://ipen.org/sites/default/files/documents/ban-basel-fact-sheet-v2_1-en.pdf

The Basel Convention on the Control of Transboundary Movements of Hazardous Wastes and their Disposal was adopted on 22 March 1989. It is an international treaty aiming to control trans-boundary movements of hazardous waste and its disposal. A global ban on the export of hazardous waste from developed to developing countries (the Ban Amendment) came into force in December 2019 and was ratified by 99 countries, except for Thailand, Australia, Japan, and the US. Many NGOs, EARTH and Arnika included, are calling for all countries to ratify the Basel Ban and the Basel Convention and they encourage all countries to ban imports of electronic and plastic waste. The list of wastes considered any category contained in Annexes I and III. In 1998, Annexes VIII and IX were added to the Convention, to provide further elaboration as to the wastes regulated by the Convention as listed in Annexes I and III. In 2019, the fourteenth meeting of the Conference of the Parties adopted further amendments to Annexes II, VIII, and IX to the Convention by amending or inserting entries on plastic waste. These amendments become effective on 1 January 2021. Information retrieved from https://www.unep.org/resources/report/basel-convention-control-transboundary-movements-hazardous-wastes , http://www.basel.int/TheConvention/Overview/TextoftheConvention/tabid/1275/Default.aspx

Text and Annexes of the Convention (Revised in 2019): http://www.basel.int/Portals/4/download.aspx?d=UNEP-CHW-IMPL-CONVTEXT.English.pdf

(6) HS Code 3915 is a custom code including products classified as “plastic scrap, parings, and waste”. Information retrieved from https://oec.world/en/profile/hs92/scrap-plastic?redirect=true

(7) This data was compiled and organized by EARTH from the Information Communication Technology Website, Office of the Permanent Secretary for the Ministry of Commerce. Information compiled from http://tradereport.moc.go.th/TradeThai.aspx

(8) This data was compiled and organized by EARTH from the website of the Department of Industrial Works, Ministry of Industry. Source of Raw Data:  http://userdb.diw.go.th/report2.asp

(9) HS Code 8548 is a custom code including products classified as “Waste and scrap of primary cells, primary batteries and electric accumulators; spent primary cells, spent primary batteries and spent electric accumulators; electrical parts of machinery or apparatus, not specified or included elsewhere in this Chapter”. Information retrieved from https://www.seair.co.in/hs-codes/heading-8548-waste-scrap-primary-cells-batteries.aspx