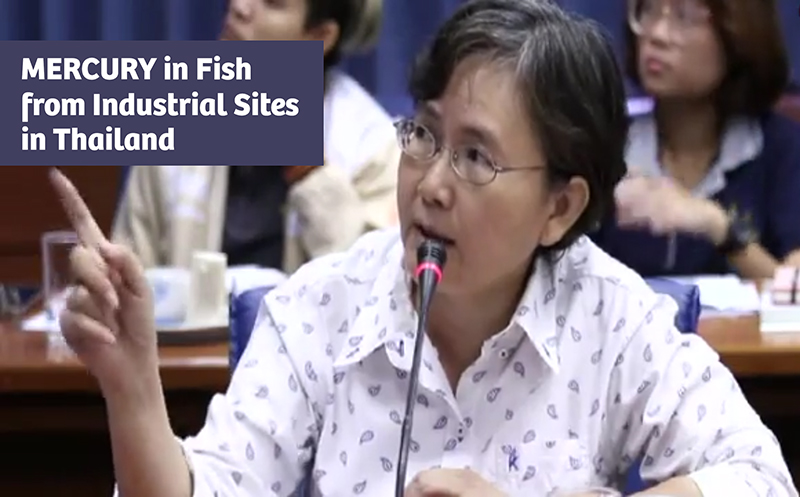 BANGKOK/PRAGUE - Everyday food of hundreds of thousands people living in Thailand is contaminated with mercury in various fish species, study shows (1). This common dish ingredient in the Asian country often contains twice the amount of this toxic heavy metal than limits allow. The highest contamination was found in fish from the industrial areas, however, further located and less exposed regions are also vastly affected, even the national parks. “The medical and economic consequences of food source contamination and fishermen livelihood should be considered,” director of Thai non-governmental organization EARTH Penchom Saetang suggests.

The study conducted by Jana Tremlova, Ecological Alert and Recovery Thailand (EARTH), and Czech non-governmental organization Arnika confirms bioaccumulation and bio-magnification of mercury higher in the food chain resulting in the generally higher content of mercury in carnivorous fish. One of them, the snakehead fish is at the same time a valuable food source in South East Asia.

“Alarming 82 % of the snakehead fish samples, the most often represented species, exceed the Thai legal standard for mercury in food which together with its frequent occurrence may cause serious health effects for its consumers,” Arnika’s expert on toxic pollution Jitka Strakova informs.

This situation should get better regulated with a help from Minamata Convention on Mercury (2) which became into force 17th of August this year  and was ratified by Thailand in June 2017. This agreement signed by 128 countries and ratified by 75 of them will help similar areas to deal with mercury pollution. First official meeting of Minamata Convention will take place from 24 to 29 September 2017 in Geneva, Switzerland.

Map Ta Phut and Tha Tum - two industrial estates are the guiltiest for the mercury contamination of the environment in Thailand. Today released  report names places with disturbingly high concentration of mercury in local fish meat. Levels of the element amount discovered in both said locations on the coast Thailand (located in Rayong and Prachinburi Province respectively) come among other pollution sources from petrochemical industry and coal power plants.

However unsurprising that heavy industrialized areas occur on the top of the list, other sites with fish highly polluted by mercury, Thap Lan National Park and Chantanaburi. are far more shocking as they  are  in rather remote countryside parts with clean environment.,None of them, moreover, finds itself in close range from any known source of pollution. Nevertheless, a possible explanation has emerged.

“Both those remote areas are located less approximately fifty kilometres from large industrial parks including those in Tha Tum and Map Ta Phut and might be affected by the atmospheric deposition and accumulation of the mercury,” Jindrich Petrlik from environmental organization Arnika offers a possible explanation of this state. “That would mean the polluters don’t only affect their nearby environment, but could easily endanger any further located areas,” he concludes worried.

Authors point out that fish are often recommended to children and pregnant women as naturally healthy, due to the contamination it might not be so. Akarapon Teebthaisong, EARTH’s pollution expert says: “Mercury levels vary between different fish species and areas where they come from. In some cases we found the amount twice exceeding the 0.5 mg/kg limit applied in Thailand for sea fish, and even much higher exceedance of the limit 0.02 mg/kg applied for freshwater fish,” he states.

The report also reminds that “big carnivorous fish from polluted areas are more likely to have much higher mercury levels comparing herbivorous fish from the same place,” the study concludes.

Mercury is a well-known toxin that has damaging effects on human health affecting mostly nervous and other body systems including cardiovascular, respiratory, gastrointestinal, hematologic, immune and reproductive systems. Its neurotoxicity is most damaging for developing organisms and therefore for pregnant women. Fetuses are the most sensitive group while exposed to mercury in the environment of the mother.

High levels of mercury residues have been objectively found in hair samples of the Thais, confirming the element circulation in the food chain.

“The analysis proved the occurrence of mercury in human hair with higher concentration of the element in the samples from the regions of higher mercury content in the environment,” chairman of Arnika Jindrich Petrlik confirms.

Fish sampling and pollution monitoring in Thailand is a part of the Increasing Transparency in Industrial Pollution Management through Citizen Science project funded by the European Union (EU). It will enable affected communities to generate scientific evidence about industrial pollution causing environmental and health damages, to promote corporate accountability and citizen access to information about environmental issues. The activities are implemented by local NGO Ecological Alert and Recovery - Thailand (EARTH) together with Arnika from the Czech Republic.

1/ Quoted report: Mercury in fish from industrial sites in Thailand by Jana Tremlova. Full text can be downloaded here.

2/ The Minamata Convention on Mercury became into force on August 16th, 2017. It will help various countries with drafting the plan of actions aiming to reduce and/or eliminate mercury releases from anthropogenic sources into environment. The agreement is named after the ecological disaster in Japanese city of Minamata, Kumamoto prefecture. Since 1956 the mercury contamination of fish in local bay caused death of thousands, ten times more are affected for life. Read more on the website or the convention’s full text

3/ IPEN is network bringing together leading environmental and public health groups around the world to establish and implement safe chemicals policies and practices that protect human health and the environment. Both Arnika and EARTH are active participating organizations in IPEN. They share the join mission of a toxics-free future for all.