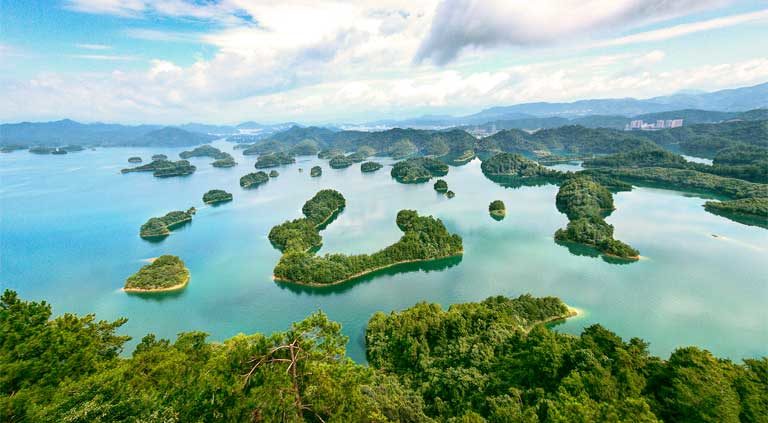 Thousand Island Lake in China, the result of a dam built in the 1950s on the Xin’an River. A global study has found that greenhouse gas emissions from reservoirs are substantial, with methane contributing to 90 percent of a reservoir’s global warming potential during the first 20 years of its life. Photo by Bryan Ong on Flickr, under a Creative Commons CC BY-NC-ND 2.0 license

From the Amazon Basin to boreal forests, and from the Mekong to the Himalayan foothills, rivers worldwide are being targeted for major new dams in a global hydropower boom that also aims to supply drinking water to exploding human populations and to facilitate navigation on the planet’s rivers; 3,700 new dams — 847 of them larger than 100 MW — are slated for construction.

But one strong argument in favor of hydropower is now looking far weaker. Scientists have compiled the most comprehensive assessment yet of the global impact that dam reservoirs have on the world’s atmosphere and greenhouse emissions. And it isn’t good news.

Globally, the researchers estimate that reservoirs — long considered “zero emitters” by the United Nations climate program — contribute 1.3 percent of man-made greenhouse gas emissions. Emissions on this scale are comparable to those from rice paddy cultivation or biomass burning, the study authors write.

But despite their magnitude, these reservoir emissions are not currently counted within United Nations Intergovernmental Panel on Climate Change (UN IPCC) assessments. In fact, countries are currently eligible under the UN’s Clean Development Mechanism to receive carbon credits for their newly built dams. The study raises the question as to whether hydropower should continue to be counted as green power.

The study, published in BioScience, looked at the carbon dioxide (CO2), methane (CH4), and nitrous oxide (N2O) emitted from 267 reservoirs across six continents. In total, the reservoirs studied have a surface area of more than 77,287 square kilometers (29,841 square miles). That’s equivalent to about a quarter of the surface area of all reservoirs in the world, which together cover 305,723 square kilometers (118,040 square miles) — roughly the combined size of the United Kingdom and Ireland.

“The new study confirms that reservoirs are major emitters of methane, a particularly aggressive greenhouse gas,” said Kate Horner, Executive Director of International Rivers, adding that hydropower dams “can no longer be considered a clean and green source of electricity.”

Importantly, the study teased apart the relative emission contributions of each of the three gases — a crucial consideration as these gases have varying degrees of impact on global temperature. Methane and nitrous oxide are many times more potent than carbon dioxide, and they also behave differently over time once released into the atmosphere, and both of these factors are relevant in the context of short and long-term policies on emission targets. Over a 100-year timeframe, methane’s effect on global warming is more than 30 times, and nitrous oxide’s effect is almost 300 times, greater than CO2.

But the study authors argue that the next 100 years are not nearly so relevant as the next 20 years for determining climate change policy aimed at quickly curbing global warming and meeting global emission targets set out in the Paris Agreement. And because methane “is relatively short-lived in the atmosphere (atmospheric lifetime on the order of a decade) relative to CO2 (atmospheric lifetime on the order of centuries),” they write, CH4 “has a higher global warming potential over the shorter 20-year time horizon.”

In fact, methane’s effect is 86 times greater than that of CO2 when considered on this two-decade timescale. Importantly, the study found that methane is responsible for 90 percent of the global warming impact of reservoir emissions over 20 years.

The trouble with bubbles

Around half of the methane emitted from reservoirs is released in bubbles, which rise from sediment and travel through the water column to the reservoir’s surface. The gas trapped inside these bubbles in the water column, “is the most direct route for methane to reach the atmosphere without being turned into carbon dioxide via [interaction with] oxygen,” said Tonya DelSontro, one of the study’s co-authors, of the University of Quebec, Montreal.

Accounting for the contribution of methane bubbles is therefore a vital component of accurate reservoir emission estimates, but measuring them is challenging. Bubbles are hard to locate, explained DelSontro, who has studied methane emissions from lakes and reservoirs in Switzerland, Zambia and Canada.

Many factors affect when and where bubbles occur, and how likely it is that researchers will detect them, such as proximity to the shore and to river inflows, and water and air pressure. The method used to measure gas emission from reservoirs is also important, as many commonly used techniques may miss bubbling — known as ebullition — altogether. The scientists report that only half of the studies they examined took bubbles into account in their methane emission measurements — meaning methane emissions are being undercounted.

Reservoir emission estimates that included ebullition in their calculations were on average double those that did not, but the contribution of methane bubbles was “also highly variable, constituting anywhere from 0 to 99.6 percent of total CH4 flux [methane emitted into the atmosphere],” the scientists write. “This highlights how crucial it is to measure both types of CH4 emission in order to estimate the total flux from reservoir surface waters.”

What determines how much greenhouse gas a given reservoir emits? Previous studies pointed to the importance of latitude, with tropical reservoirs — such as those planned or under construction in the Amazon — counted as emissions heavyweights. But this latest study found that mid-latitude reservoirs could be equally high methane emitters. Rather than latitude itself being important, methane emissions were best predicted by reservoir nutrient-richness.

If nutrients and organic materials — able to sustain microbial and algal populations — are abundant, methane emissions will be higher. This is often the case in tropical forest reservoirs, because a lot of vegetation may be submerged at the time the reservoir is first filled. But the authors identified other potentially high methane emitters: reservoirs built in productive agricultural regions at other latitudes — where nutrients and organic matter may leach from catchment areas into the reservoir.

The new research also identified water temperature as being an important factor, with warmer water promoting microbial and algal activity. How this will play out as global temperatures rise is uncertain, but the researchers warn that a “potential positive feedback loop” could be created as a warmer global atmosphere heats the planet’s reservoirs.

DelSontro explained that “future climate change, human population pressure, increased agriculture and other land use changes could cause an increase of nutrient input into freshwaters, thereby stimulating production (e.g., algal blooms) and perhaps higher rates of methane emission.” More methane in the atmosphere would mean a warmer climate, which could in turn enhance algal and microbial growth in the reservoirs, resulting in more greenhouse gas emissions that would further warm the climate.

The study also highlights other important emission pathways that are not generally taken into account when reservoir emissions are calculated, and that require further study. These include emissions from “drawdown zones,” the areas that are repeatedly exposed and flooded as water levels fluctuate; “degassing” as water is aerated in turbines and spillways; and the decomposition of standing wood, known to be a major contributor to tropical reservoir emissions but not studied elsewhere.

The authors caution that with a near doubling of reservoir area predicted for the coming decades, the benefits of new dams need to be carefully weighed against the costs of building them: 847 large (more than 100 MW) and 2,853 smaller (more than 1 MW) hydropower projects are currently planned or under construction around the world.

Importantly, the greenhouse gases that reservoirs emit should no longer be overlooked in international policy, the researchers argue, but instead be included “in future UN IPCC [Intergovernmental Panel on Climate Change] budgets and other inventories of anthropogenic GHG [greenhouse gas] emissions,” particularly as methane emissions have the greatest impact in the first 20 years of a reservoir’s life.

“The role of hydroelectric dams in emissions inventories and in mitigation has been systematically ignored,” and urgently needs to be addressed, wrote Philip Fearnside, of the National Institute for Research in Amazonia, in 2015.

“International Rivers has advocated for reservoir emissions to be included in national greenhouse gas inventories for many years,” Horner added, “and the IPCC should no longer give dam builders a pass when it reconsiders its methodology for such inventories.”

Fearnside highlighted another significant omission in IPCC consideration of reservoir emissions: land-use change such as deforestation, which often accompanies dam construction. Horner raised the same issue: “Hydropower projects, for example, in the Amazon, in Central Africa and in Southeast Asia often open up pristine forest areas to deforestation. The findings of the study are conservative in that they don’t consider the massive emissions from this additional deforestation.”

Some of the emissions that reservoirs produce can be mitigated if dams are sited upstream of nutrient sources, and if nutrient levels are reduced in reservoir catchment areas, the scientists suggest. Clearing vegetation before inundation is another strategy to reduce the initial spike in methane emissions. However, Horner cautioned, “the cleared biomass will still emit CO2 when it burns or decomposes, and the long-term emissions from organic matter that is deposited in a reservoir can’t be avoided.”

DelSontro’s ongoing research in the lakes of Quebec suggests that understanding the interaction between temperature and nutrients is important for accurate greenhouse gas emission predictions. “These types of predictors are what some people, including myself, are looking for to better help us make predictions for potential changes to greenhouse gas budgets of freshwaters in the face of global environmental change.”

“As for reservoirs in particular, it is vital to understand that these water bodies have the potential to emit greenhouse gases, even hydroelectric reservoirs that are helping produce a ‘clean’ and ‘green’ form of energy,” she concluded. “Therefore, potential reservoir projects should include an environmental assessment that includes potential greenhouse gas emissions, bearing in mind that emissions from the natural ecosystem must be taken into account.”

Horner takes a bolder stance on new hydropower dams: “At a time when wind and solar power have become cheap and abundant, such greenhouse gas emissions can’t be justified.”