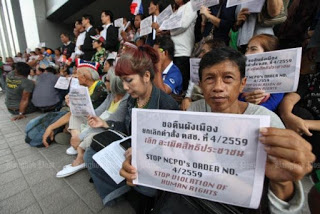 Residents and environmentalists from Bangkok-area provinces petitioned the Supreme Administrative Court to abolish a National Council for Peace and Order directive which allows waste-to-energy plants without any environmental studies. (Photo by Thiti Wannamontha)

They filed a complaint against Prime Minister Prayut Chan-o-cha and other NCPO members, saying the order violates the people's right to live in areas that are clean and healthy.

The NCPO order 4/2559 exempts power plants, including coal-fired, biomass and waste-to-energy plant projects across the country from complying with previous land planning regulations, and bars people from participating in any city planning management, according to the group.

Surachai Trong-ngam of the Environmental Litigation and Advocacy for the Wants (Enlaw) said local people are currently suffering from the NCPO's 4/2559 order, which paves the way for power plant construction in several areas, including "green zones" reserved for conservation and agricultural purposes.

Mr Surachai said the order will create long-term negative impacts for the environment and health of local communities as power plants could be built anywhere regardless of land usage and conservation.

"I want to ask the court to nullify the NCPO's order to protect people's rights and freedoms, especially those who are affected by it," he said.

Several plant projects including a coal-fired power plant in Chachoengsao's Khao Hinsorn area were constructed with no consideration for the environmental impacts, and violated existing laws, according to the environmental advocate.

Thaweesak Inkwang, a key opponent of the waste power plant in tambon Chiang Rak Yai in Pathum Thani province and one of the 12 claimants, said he was confident that the court will hear the case as it is the last hope the people seeking justice have.

Mr Thaweesak added that local residents in Sam Khok district's Chiang Rak Yai oppose the project due to the plant's proximity to temples, a hospital and Thammasat University.

Locals say their land and ability to farm it have been hindered by the disruption caused by the transportation and processing of the 1,800 tonnes of rubbish that the plant collects every day from the province to fuel the facility.

The Metropolitan Waterworks Authority also joined the local protest, saying the plant is located close to a water utility that produces tap water for millions of people in Bangkok.

More than 100 independent organisations and local communities in February submitted a letter to Gen Prayut calling on him to revoke the order. However, he has yet to respond.